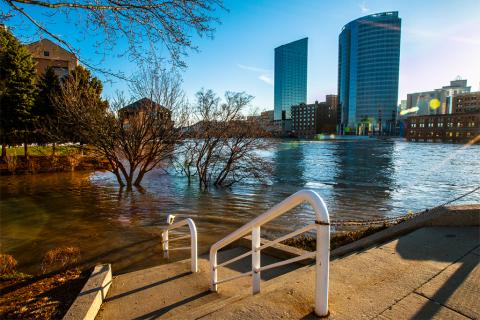 Effective adaptation to climate change is nowhere more critical than in cities because most people now live in urban environments. The Great Lakes watershed accounts for one-fifth of the world’s fresh water and houses approximately 10% of the US and 25% of Canadian populations (40 million people total). Climate change impacts in the Great Lakes region are anticipated to worsen risks of flooding, reduce water availability and quality, increase problems related to heat stress, and negatively impact economies in cities dependent on tourism and recreation.

Despite these anticipated risks and their substantial adverse impacts on populations in the Great Lakes region, many urban decision makers highlight the need for place-based climate science and options for responding to impacts. The Great Lakes Adaptation Assessment for Cities worked closely with regional partners and urban decision makers to identify adaptation needs, opportunities for action, and relative costs of different response options.

Through the support the University of Michigan Graham Sustainability Institute and the Kresge Foundation, and in collaboration with Great Lakes Integrated Sciences + Assessments (GLISA), this Integrated Assessment (IA) strengthened the science and decision making necessary for more effective urban climate adaptation in the Great Lakes region (both Canada and the U.S.). The IA was led by several University of Michigan (U-M) faculty research teams in coordination with partners across the region.

For cities to develop and implement effective climate adaptation policies, they require a wide range of scientific, social, and policy information. This project engaged experts from diverse fields to:

A variety of climate adaptation strategies have been implemented throughout the Great Lakes region. Climate scientists provided historical climate data and worked wtih municipalities to assess climate risks, such as flooding and increased heat and aging infrastructure. Key factors considered by many city leaders include specific risks to vulnerable populations, emergency response, and public health. Lessons learned from interacting with these cities are summarized in this series of fact sheets.

Located in Southeast Michigan, the City of Ann Arbor is a leader in sustainability and environmental planning. Known as tree city, Ann Arbor has a total population of 113,934 spread over 27 sq. miles, and is home to the University of Michigan. Average per capita income in Ann Arbor is $30,498 USD.

Located in Southwest Ohio, the Dayton leaders are innovative. Strong regional partners and a can-do spirit are the building blocks of climate change adaptation efforts. The City has a total population of 141,527 spread over 57 sq. miles. Average per capita income in Dayton is $16,702.

Located in Southeast Michigan, the City of Flint faces is located along the Flint River. The Imagine Flint Master Plan is focused on making the City sustainability and better able to address climate change efforts. The city has a total population of 102,434 spread over 34 sq. miles. Average per capita income in Flint is $14,910 USD.

Located in Eastern Ontario on the Northeast shore of Lake Ontario and at the headwaters of the St. Lawrence River, the City of Kingston aspires to become ‘Canada’s Most Sustainable City.’ The city will be addressing climate change impacts through mitigation and adaptation in its Climate Action Plan. The city has a total population of 123,363 spread over 450 sq. kilometers. Average per capita income in Kingston is $31,370 CAD.

Minnesota is the fastest-warming state in the continental U.S. during the winter, with temperatures and overnight low temperatures contributing the most to the rapid warming (1970-2012, NOAA). City leaders are adjusting infrastructure to accommodate a growing population, and more severe temperatures and precipitation events.

In 2015, St. Paul secured a grant from the Minnesota Pollution Control Agency to develop a strategic climate change Resilience Framework. Part of the Framework includes increasing green infrastructure to improve storm water management. Other aspects of the Framework focus on improving communication about how to reduce the effects of climate change on city residents, especially more vulnerable populations.

Located in Northern Ontario on the north coast of Lake Superior, Thunder Bay is a leader in sustainability and climate change adaptation planning. The City has a total population of 108,359 spread over 447 sq. kilometers. Average per capita income in Thunder Bay is $31,182 CAD.

Located in Northwest Ohio on the shores of Lake Erie, the City of Toledo identifies climate change as a matter of environmental, economic, and health concern. The city has a total population of 287,208 spread over 84 sq. miles. Average per capita income in Toledo is $18,758 USD. More information on trends in the climate of the Toledo region over the last forty years can be found on GLISA’s website.

The Kresge Foundation and Graham Sustainability Institute provided $1.2 million of project funding in 2011.