VIDEO: Sustainability Goals Reflect the Work of Many 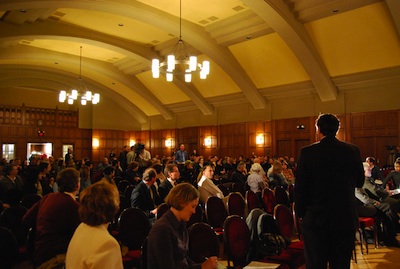 "We were charged with coming up with a set of goals for the campus, and you could do that in the standard way by turning to the operations people and asking them what should we do. But the Graham Institute had been pioneering the integrated assessment process that brings together multiple stakeholders and multiple disciplines to have long and deep conversations about the problem — involving as many people as possible," says Don Scavia, special counsel to the president for sustainability and director of the Graham Institute.

The 75 student participants alone put in more than 10,000 hours on two phases of the assessment, Scavia says. In Phase 1 analysis teams "conducted literature reviews, benchmarked peers and assessed U-M practices," according to the CSIA. "During Phase 2, the teams conducted more detailed analyses on potential actions that included costs, benefits, technical guidance, evaluation of uncertainties, and implementation timeframes," the report states.

"The students were amazing. They were very sophisticated doing detailed technical analysis but also financial analysis. They looked at the costs and benefits associated with various options," Scavia says, adding that they also did extensive benchmarking with other universities.

Patty Liao, a dual master's degree student in mechanical engineering and natural resources and environment, served on the Energy analysis team in the first phase and conducted wind energy benchmarking. For Phase 2 she developed a solar thermal hot water heating model, using Google Earth and Google Maps and looking at various rooftops on campus to estimate how much solar installation there could be and the costs. One of the lessons she learned in her work on the assessment was that not all renewable energy solutions would pay themselves back over a short period of time.

"I think that was just a factor of us being in Michigan and the weather not exactly being to our advantage. So that was sort of disappointing to see," Liao says. But she says geothermal and biomass installations are possible solutions for U-M.

Liao says she looks forward to the next steps. "I would be really excited to see sustainability sort of become ingrained in the campus, as opposed to right now it seems like we are fighting with every single part individually to try to make something a little bit more sustainable."

Amy Braun, a recent School of Natural Resources and Environment graduate in environmental policy who now works for the U.S. Department of Agriculture's Farm Service Agency as a natural resource specialist, served as a member of the Purchasing & Recycling team. Her first task was to determine the environmental impact of the end-use system at U-M. An end-use system involves the entire cycle of goods consumed by the university, taking into consideration what is purchased, how it is used and what happens to it when it no longer is needed.

For the second phase she created a process flow diagram to show material and financial movement through the system, and worked with Property Disposition to identify ways to improve the department's efficiency and sustainability. She hopes the work of her team will be one of the priorities to be addressed in the president's goals.

"This is one of the unique problems where the solution can not only reduce our environmental footprint but save the university money and elevate the status of the school. It is these win-win opportunities that must be addressed to take steps forward in sustainability," Braun says, adding that involvement in the assessment process showed her how invested university leaders are in sustainability.

"I was struck by the commitment of President Mary Sue Coleman to greening the campus. The professors involved in the assessment were very passionate about the cause and to ensure the student voice was heard by university leadership," Braun says.

One of those faculty members is Larissa Larsen, associate professor of urban planning, Taubman College of Architecture and Urban Planning, who led the team that looked at food.

"There's been a groundswell of student, faculty and staff interest around improving the quality of food, improving the connections to local producers, and thinking about issues of sustainability and waste reduction, " Larsen says.
In addition to the seven people who worked on the team, the Food group received input from across campus and other universities.

"We had the students working on the team and quite a bit of input through the website and some of the town hall meetings that we had," Larsen says. Her team also did best practice benchmarking, and they tapped several campus sustainability related student organizations for their input.

Another group that did considerable benchmarking spent even more time taking the pulse of the community, says Culture team leader Robert Marans, research professor, Institute for Social Research; and emeritus professor of architecture and urban planning.

"During the first phase of the IA, we conducted informal interviews with a variety of people around campus — students, faculty and staff — and then looked at what was going on in other universities around the country," Marans says. "After this initial work, we designed a program for collecting cultural indicators that will periodically measure peoples' feelings, peoples' levels of awareness and knowledge about sustainability, and their behaviors."

Beatrice Holdstein, a Graham Scholar and a junior in Program in the Environment who served on the Culture team, will continue to work on an advisory group that will gather more information on campus attitudes and practices. Holdstein says the IA was a great experience personally, and one that will bring tremendous benefit to the university.

"I think it was a really good process because there were a lot of different faculty involved and they also tried to incorporate students from different perspectives. I came in as a freshman, which was a really unique stance," she says.

Holdstein looks forward to the president's announcement of the goals.

"I'm really hoping to hear from President Coleman more about her commitment to sustainability and where she thinks the university stands in term of our progress thus far, and where we can grow as an institution and become leaders in sustainability."