A Summary of Harmful Algal Blooms and Hypoxia Forecasts for Gulf of Mexico, Chesapeake Bay, and Lake Erie

HABs can appear bright green and may look like paint floating on the water. Image courtesy of NOAA-GLERL.

Lake Erie, Chesapeake Bay and the Gulf of Mexico

Harmful algal blooms (HABs) and Hypoxia (low oxygen) are increasingly common problems in both marine and freshwater ecosystems. These problems are driven primarily by excess nutrient loading (e.g., phosphorus, nitrogen) from land, which is in turn driven by land-use choices and practices, wastewater treatment, and weather patterns.

HABs can contain severe toxic cyanobacteria (e.g., Microcystis sp., and Anabena sp.), and are a persistent problem in Lake Erie, and other fresh and saltwater systems. In the Great Lakes, HABs usually peak from August-September, and can be harmful and even fatal to aquatic life and people.

Hypoxia is a problem in the central basin of Lake Erie, the Chesapeake Bay, the Gulf of Mexico, and elsewhere. When algae die, settle to the bottom, and decay, it can reduce oxygen levels to conditions dangerous to fish.

Scientists from the University of Michigan (U-M), the University of Maryland (UMCES), North Carolina State University (NCSU), Louisiana State University (LSU/LUMCON), Virginia Institute of Marine Science (VIMS), LimnoTech, Carnegie/Stanford, and the National Oceanic and Atmospheric Administration (NOAA) developed models capable to forecast hypoxia and HABs in these three iconic systems and each year they combine efforts to release their forecasts. The U-M group is the only one contributing to all three forecasts.

The Lake Erie forecast comes from an ensemble of forecast models developed by U-M, NCSU, NOAA, Carnegie/Stanford, and Limnotech.  The ensemble forecast called for a HAB with a severity index (SI) of 7.5 with a range of 6.5-9.  A SI of 10 is comparable to the largest bloom on record (2011).  The U-M model predicts a 36,800 metric ton HAB, with a 95% credible interval of 24,400 to 47,800 metric tons (corresponding to a SI of 7.1 with a credible interval of 5.8-7.9). The bloom size over the last decade (2007-2016) has averaged 22,000 MT. As a result, this year's bloom is likely to be significantly larger than the average, comparable to the three largest blooms on record, including the one that caused the city of Toledo to issue a “do not drink or boil” advisory in 2014.

The U-M Chesapeake Bay forecast called for a hypoxic region of about 1.9 cubic miles, nearly the volume of 3.2 million Olympic-size swimming pools, which is larger than the long-term average (1.7 cubic miles) measured since 1950. The anoxic, or oxygen-free, portion of the zone is predicted by UMCES to be 0.35 cubic miles in early summer, growing to 0.49 cubic miles by late summer. Above average river flow and low nutrient loading from the Susquehanna and Potomac rivers this spring account for this larger-than-average predicted size of the hypoxic and anoxic zones. The hypoxic and anoxic zones remain considerably larger than the size implied by the targets set under the Chesapeake Bay Total Maximum Daily Load agreement.

The Gulf of Mexico forecast is an ensemble of forecast models developed by U-M, NCSU, LSU/LUMCON, and VIMS. The ensemble called for a hypoxic region of 8,185 square miles, an area roughly the size of New Jersey. This is more than 4 times the goal set by the intergovernmental task force in 2001, and the third largest hypoxic zone since measurements began 32 years ago. There is a 90 percent chance that it will be between 5,323 and 11,535 square miles. The U-M model predicts a slightly smaller zone, 7,715 square miles. The long-term average dead zone is 5,209 square miles.

These annual forecasts are motivated by two goals: 1) to raise public and political awareness of the policy issues driving these phenomena and 2) to test model skill and increase confidence in their use for testing policy-relevant scenarios. While the U-M Lake Erie HAB forecasts have begun only recently, our annual forecasts for the Gulf of Mexico and Chesapeake Bay began in and 2002 and 2007. With the exception of years with extreme and unanticipated weather events like hurricanes and tropical storms (e.g., 2003 and 2009 in the Gulf; 2007 and 2014 in the Bay), those annual forecasts have been fairly accurate. Note, there were no measurements of Gulf hypoxia in 2016. 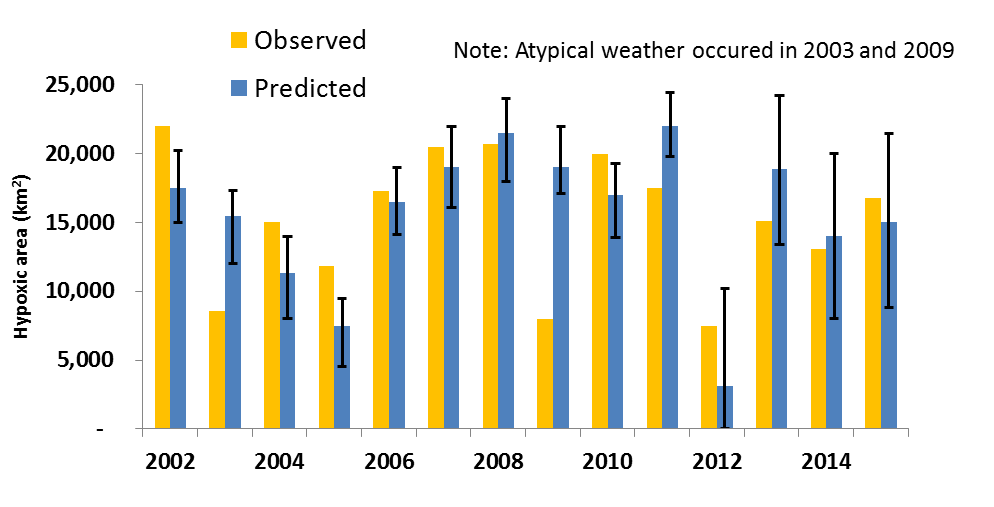 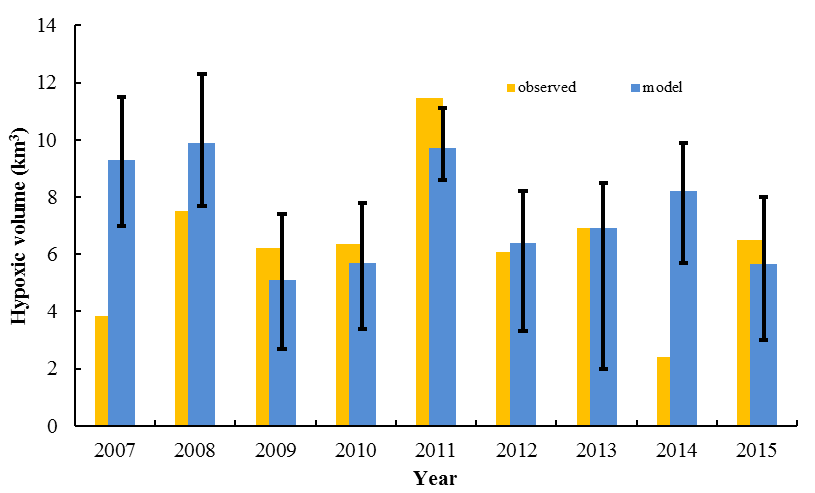 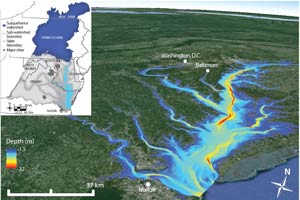