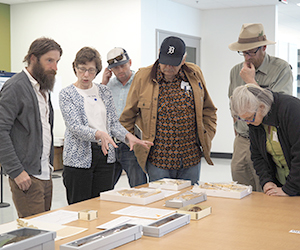 Anishinaabe communities have lived sustainably for thousands of years, understanding plants as living beings and seeds as living spirits. It’s all about the relationships we have with the land and everything.
— Kevin Finney, Tribal Consultant

“It began with our ancestors,” says Shannon Martin describing the path that took her and others to seek a partnership with the University of Michigan (U-M). The partnership is designed to facilitate reconnecting Anishinaabe communities (Native American and First Nation communities of the Great Lakes Basin) with seeds, and plant samples in the U-M ethnobotanical collections.

Recently, Martin, of the Saginaw Chippewa Indian Tribe, was one of a number of representatives from several Anishinaabe tribes who participated in a meeting hosted at the U-M Matthaei Botanical Gardens and Nichols Arboretum (UMMBGNA). The meeting is part of a collaborative effort organized by Dr. Lisa Young (Museum of Anthropological Archaeology - UMMAA - research affiliate and lecturer, Department of Anthropology, College of Literature, Science, and the Arts) and Dr. David Michener (associate curator, MBGNA).

The process of reconnecting the Anishinaabe people with native seeds involved Martin and representatives from the Match-E-Be-Nash-She-Wish Band of Pottawatomi Indians (the Gun Lake Tribe), the Bkejwanong Walpole Island First Nation, the Pokégnek Bodéwadmik (Pokagon Band of Potawatomi), the UMMBGNA, UMMAA, Ferris State University, the Intertribal Agriculture Council, and the United States Department of Agriculture, gathered with U-M’s Young, Michener, and others.

The meeting is a critical component of the Heritage Seeds for Sustainable Lifeways project, supported by the Graham Sustainability Institute. The goal of the meeting was to determine how collections can be innovatively used in partnership with the Anishinaabek, and how and when to assess the viability of archived seeds. Participants focused on identifying key challenges and sharing ideas and information. The group also addressed essential questions of how museums can aid in promoting sustainable lifeway initiatives in indigenous communities, like seed sharing and teaching native foodways.

Michener, co-Principal Investigator of the Heritage Seeds project, says that there are similarities between the project and efforts of seed-savers trying to keep older varietals alive. But Michener and project partners are focusing more on the unique cultural value of the seeds.

“What makes [the seeds] important or unique is we’re assuming they have some distinctive if not unique genotypes, that for whatever reason have been bred out, or are recessive, or are not important in current plants of the same species that are being grown, and that these different genotypes reflect the prevailing needs and values of the communities from which they arose,” said Michener.

As part of various research endeavors for nearly 100 years, U-M scientists collected plant specimens and information on uses from tribal community members and stored them in what is now the UMMAA, part of the U-M Research Museums Center, located in south of campus.

“[Ethnobotanists] collected a wide variety of corn, many from the Southwest but also from the Great Lakes region. The Great Lakes plant collection also includes a lot of wild plants because the people doing the collecting were very interested in medicines,” said Young.

A Culture of Sustainable Foods

Sustainable food production is an integral component of Indigenous cultural heritage around the Great Lakes and a growing effort at U-M (see: Sustainable Food Program) Some varieties of corn in the U-M collection have unique and culturally significant preparation processes and associated tools and meals; gaining access to these varietals is important to for reviving and sustaining native foodways. 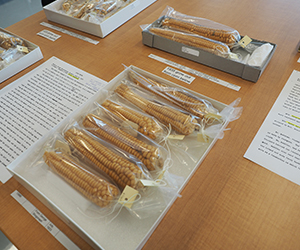 Wild rice is another culturally important seed with complex gathering and preparation processes intertwined with past and current Anishinaabek lives, according to Dr. Scott Herron, an ethnobotanist at Ferris State University who has been studying the plant extensively for the last several years. In addition to seeds often thought of as food crops, like corn or rice, the seeds of plants that have ceremonial or artistic value were also included in the project. Young and Michener facilitated the discussion about native knowledge and perspectives that can be integrated with museum collections to form more equitable and respectful working relationships and promote further educational opportunities.

[Each card] “includes remnants of a dialogue between the ethnobotanist and the members of tribal communities who had a cultural relationship with the plant or seed,” said Young.

Tribal members also interacted with the seeds at the U-M Research Museums Center. Martin and her mother held heritage corn seed of their ancestors. Other tribal members noted the number of rows in the sample ears of corn and talked about the seed currently used by tribal farmers. Earlier, a scientist from the USGS mentioned the possible use of genetic testing of a small sample of a seed to determine if it might be viable for use today.

Young and LS&A student Elspeth Geiger reviewed the ethnobotanical notecards from those who collected seeds from corn, bark from ash trees, samples of sassafras roots and other materials from several Michigan counties and Sarnia, Ontario. Samples from the collection were carefully arranged by Young and Geiger according to the county or province where the samples originated. Cards placed near each sample included the plant’s scientific name, where it was collected, and how the plant was used by native peoples. 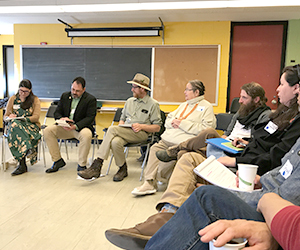 “There will be a spiritual awakening when seeds come home, individually and as a community…We listen to our blood memory to understand what our ancestors need to get them back to the earth. There are parallels with these seeds. We want all the separate parts back to make our ancestors complete.” —Shannon Martin

An Ethic of Co-learning and Information Sharing

To help facilitate information sharing between the museum and the tribal groups, Young drew on lessons she learned while working with members of the Hopi Tribe in Arizona. Together with her friend and museum professional Susan Sekaquaptewa, a Hopi woman, Young helped reconnect Hopi farmers with U-M’s Hopi seed and plant collections. Through a course, U-M students helped create an online catalog of Hopi plants and seeds and then discussed the seeds with Hopi farmers by videoconferencing. 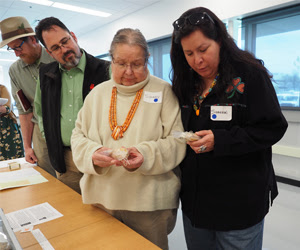 One piece of advice Hopi partners gave Young as she developed the catalog was that it should be organized by the village where each plant or seed had been collected, rather than by plant type – the way the collections are organized in the Museum. Organizing the catalog by location made it easy for tribal members to locate seeds and knowledge relevant to their families and specific geographic context.

Changing that organization to suit the stated needs of the tribal groups is one way Young is helping shift the conversation from a very Western focus on collecting to one that include the voices and cultural concerns of native peoples. Young also hopes to eventually be able to replicate the work she did with the Hopi in Michigan, and leverage online resources to connect with tribes and facilitate co-teaching and knowledge sharing about native farming and seeds through a classroom context and engaging native food producers.

The term “ethnographic seeds” is another term for heritage seeds, according to Martin. The term highlights the important cultural roles that older seed varietals play in many Native American communities.

“[These] seeds date back many generations and are not tainted by genetic modification; they could carry and grow a strain a vegetable that may have stopped growing after cultivation from our people began to decline,” Martin says.

Although heritage seeds can be up to 300 years old (sometimes older, depending on the climate in which they were stored), that doesn’t necessarily mean they are unviable. Martin believes the seeds can be grown. About five years ago, Martin noted that some very rare squash seeds were grown and shared among various tribal communities. Now tribal communities throughout the Great Lakes are growing this variety of squash that hasn't been seen in generations. “So, it can be done, with great hope, and care, and prayer working together,” says Martin. 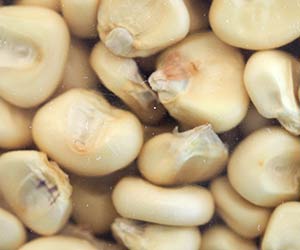 Discovering the past, or in this case the plants grown and consumed in the past, is an important path to promoting sustainable lifeways. “Lifeways” refers to the way you live, says Dr. Scott Herron, Professor at Ferris State University. Reconnecting native seeds to Anishinaabe communities is a way to draw upon the past to better understand how to be sustainable in the present. It’s also an acknowledgement of the knowledge integral to indigenous communities.

“There were and are cultures more sustainable than modern American culture,” says Herron. “I think our [Native] culture is still pretty vibrant in terms of how plants and natural resources are being used.”

By reconnecting to the seeds with which their ancestors built relationships, Anishinaabe communities can better reintroduce and reestablish native foodways, an essential aspect of cultural sustainability. Propagation and harvest techniques typically used by tribes use fewer resources and are less harmful to the land, waterways, and communities.

“We truly believe that when food is planted and it's harvested or cultivated, or food is caught or trapped or taken in prayerful or a respectful way, then that food is medicine,” says Martin. “It's healing. When you think about it, it's not healthy to buy your food wrapped in cellophane on a piece of Styrofoam. That's just not healthy living, it's not sustainable.”

The meeting in May established the basis for sustaining a long-term relationship between Anishinaabe communities and U-M, continuing to engaged in dialogue and share knowledge. One of the final steps of this project is to coordinate a second meeting to determine next steps beyond this project.

Scientists in the Field